THE GRASS IS GREENER ON THE OTHER SIDE...ROAD TRIP THROUGH THE COUNTRY I CALL HOME

Eight days might be a short trip in time but a deep one in the heart. I never traveled in such a way in Romania since I was 20 and went to the Transylvanian city of Sibiu crossing the mountains on the spectacular Transfagarasan and to the Bucovina monasteries. I did those as a guide, accompanying a French gentleman who was to become one of my best friends in the whole world.

I traveled also for work in 1998 to different areas of the country, for just a couple of days, meeting the local press. Occasionally I took touristy trips to specific cities like Brasov, Sibiu, Sighisoara, as far as Cluj in the heart of Transylvania, or the amazing Horezu town known for its hand painted ceramic pottery.

And many years after, last winter, I suddenly got the idea to spend a summer vacation traveling through a country I actually don't know much. I launched an invitation to a few friends and the only one to embark on this adventure is a very close French-Moroccan girlfriend. She drives, I don't. 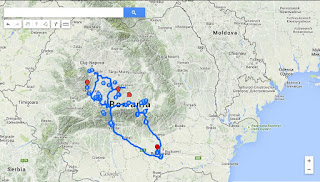 The plan was to get to Transylvania, the geographical "heart" of Romania embraced by mountains almost from all sides, and go towards North-West as far as possible. And here we were, making our way from heat hit dusty Bucharest with its marvelous garden cafés and restaurants all the way to Turda, ancient Roman castrum of Potaissa, and back. Through historical cities and villages, citadels, mountains and forests, rolling green hills and peaceful pastures, thermal resorts and what not, even a salt mine and a bear shelter! 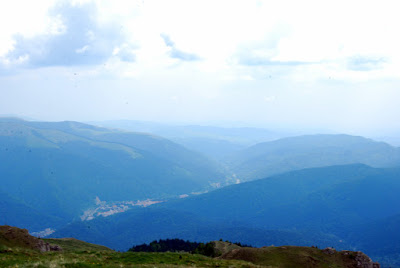 Getting fueled by great sights and yummy food, although sometimes we survived solely on bread, cheese, tomatoes and peppers, cheese pies and goat yogurt. We met some amazingly kind people on our sometimes twisted ways, the most memorable being the grocery store lady in Ighiu who allowed me behind the counter so I can look for accommodation. When we weren't hosted by my aunt, my dad's cousin or the parents of a friend we found cute B&B's for maximum 25 Euros the room. We got free strawberries at the Bassen Pension in Bazna and the sweetest receptionist ever at the Alba Iulia's Voichita motel, my dad's cousin gave us 5 litters of homemade rosé wine that we carried in the trunk the whole way. In Sibiel we saw the milk we drank being milked from the cow while we caressed the calf. I photographed the hens whose eggs we had for breakfast too. We had a lot of good, simple, naturally produced food. We brought with us red wine, some acacia honey and a few types of sheep cheese, the most interesting one being preserved in fir tree bark. 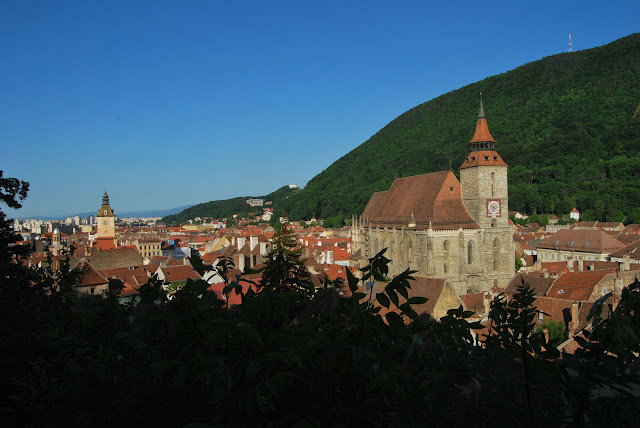 Transylvania was colonized with Saxons craftsmen as early as the XII century, when the Teutonic knights were around, fighting to protect the Southern border of the Hungarian kingdom. The region is a mixture of cultures: Romanian, Saxon and Hungarian. Some villages have their names marked in the three languages at the entrance, some are "just" bilingual. The city of Brasov for instance is also called Kronstadt and Brassó.

Most of the urban architecture looks more Germanic/Central European than Romanian. One of the most distinctive features are the fortified medieval churches, or peasant fortifications, spread all over the region. Some, like Prejmer, even had food storage and cells to host families. 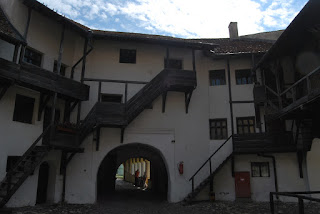 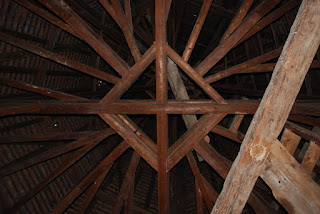 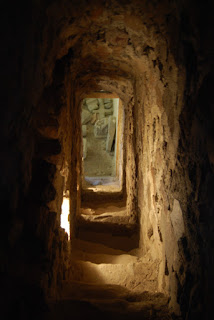 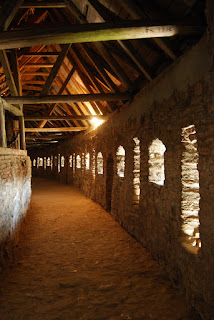 There are stunning towers, with amazing roof structures and fairy tale like atmosphere, climbing old wood stairs in dim light. There are reddish rooftops villages with colourful pastel houses raising between dark forests and lush green hills. There are the citadels of Rasnov and Fagaras, the historical cities of Brasov, Sibiu, Sighisoara, Alba-Iulia, Cluj, Medias, Sebes, all hosts to medieval cathedrals, pretty squares, a lot of them still showing walls and towers from the ancient fortified structure. Alba Iulia exhibits one of the most beautiful star shaped (Vauban) fortresses I have ever seen: Alba Carolina (and the most amazing public restrooms by the way). In Biertan inside the fortified church we saw the most beautiful door lock ever, God knows from what century, if XVI, younger or older. 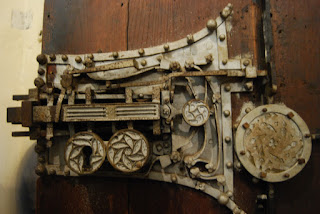 Sometimes it felt like we walked through some tale of the brothers Grimm. 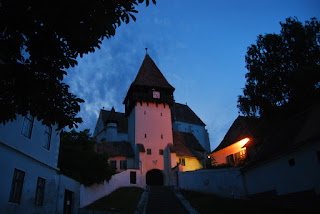 In Rasnov we also visited a cave several millions of years old, at a point the guide turned off the light and we just listened to the dripping water, the life of the cave, in continuous becoming. Darkness, silence, coolness, forever there, stalactites and stalagmites growing towards each other building a strange palace, forever there, before and after us, into the depth of time and earth.

Between Rasnov and Zarnesti there's Libearty, a shelter for bears abused by humans, who lived in cages for years being exploited for the benefit of insensitive tourists. We saw many cute fluffy golden brown bears having a peaceful breakfast. There were fences between us and them, but they seemed to have a happy free life. The other side of the coin is that bears happen to attack occasionally the outskirts of certain cities close to the forest. 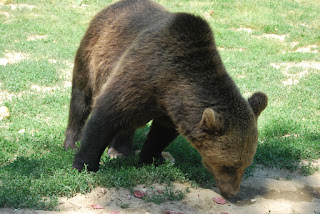 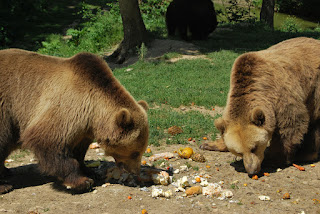 But bears are not roaming freely just everywhere so we went on a few hikes. We started on the very first day, going up the easy gondola lift way up to 2000 meters in Sinaia and walking back to 1400m, through patches of snow and green mountain slopes, stopping to check on the fragile alpine flowers that pointed the greens with pink, purple, yellow, white and indigo blue. A couple of days after we went to Piatra Craiului mountain range, up to 1400m, to Curmatura châlet, crossing the Zarnesti Gorges, sporting steep majestic calcareous rocks, then up through a fir tree forest embalmed by the smell of resin and bucolic green alpine pastures graced by flowers and flocks of sheep. We didn't spot any Rupicapra rupicapra wild goats although our necks were hurting from looking up at the rocks. 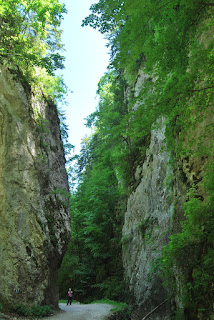 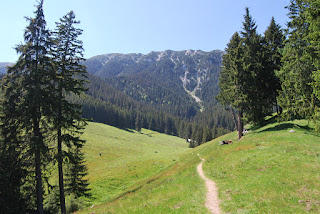 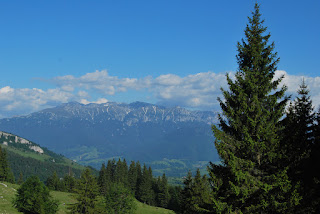 The other gorgeous Gorges were Cheile Turzii, following a lively stream and crossing some dancing bridges, sometimes on a path so narrow that we had to hang on to the cables attached to the steep rock walls. We seemed to be followed by yellow and pale blue butterflies, seemingly some forest fairies. The gorges opened to a peaceful green valley guarded by rolling hills. Just on the last morning, before heading back to Bucharest we saw a sign on the road crossing Cozia mountains, pointing towards Lotrisor Waterfall. It was a large forest path following a stream that at a point formed some beautiful transparent green pool, with forest and mountains left and right. First I heard the clamour of the flow splurging over the stones and boulders, then as we approached I saw the white stream of running water over the dark rock. The feeling of the last moment of freshness before starting to leave the mountains behind, doubled by the pure sensuality of the water serpentine coming down in a flowing caress over the stone. 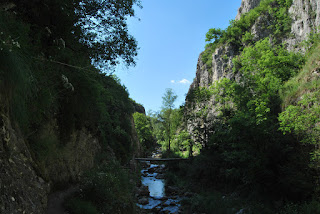 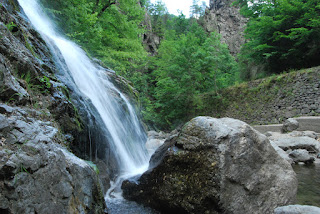 The former salt mine Turda was the real highlight of the trip, a truly magical place, quite spectacular and unbelievable, with marble like walls made of layers of ground and salt, mixing white and black curves in a neverending dance and game of shapes, palace like corridors and halls. It was considered the most beautiful underground site worldwide in some top and it's as old as history remembers, from the antiquity. The main hall is enormous, over 100m high, naturally decorated with salt efflorescences, stalactites and an underground lake with an island. Manmade scifi looking wooden structures complete the hallucinating views. You can even rent a boat and row around the lake, buy salt bars for skin treatment and deodorants. In the Crivac room there was a XIX century wooden structure that used horses to bring blocks of salt to the surface. After two weeks of going suddenly from darkness to bright light the horses would go blind and after six months they would turn useless. 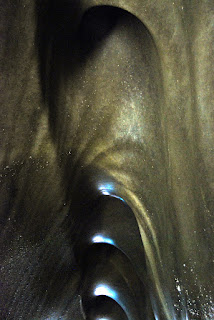 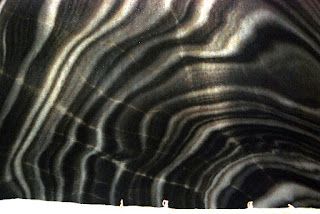 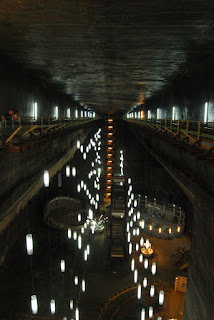 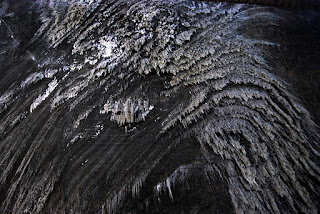 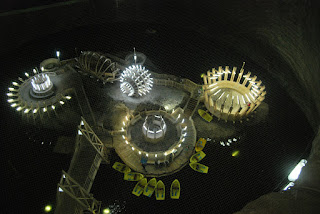 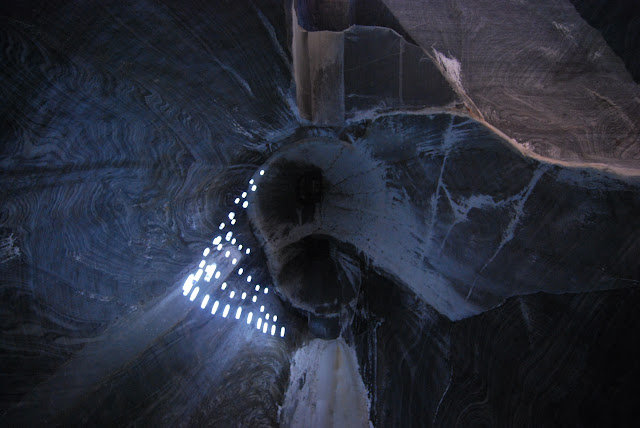 As we also needed to restore our forces from time to time we explored some thermal resorts. Ocna Sibiului sports several salty lakes among a green landscape where there used to be salt exploitations. The degree of salinity differs from one lake to another, we spread some stinky black mud all over our bodies and went floating in about four of the lakes. In Bazna there were outside and inside pools of warm dark green water packed with minerals, same in Caciulata between the mountains where the pools also offered hydromassage. All at maximum five Euros dumping prices.

I am realizing now the power of water, that takes so many shapes and we experienced in so many ways during the trip. Away from the sea there were rivers, streams, creeks, springs, pools, lakes and waterfalls, underground waters making their ways through the rocks and creating caves or gorges. In Sibiel we could hear the stream that flows along the unpaved road, the same in Caciulata where we slept basically on the street leading to the forest. Sometimes the water would mirror a monastery or a village, other times it would rush over stones through its green banks where a horse may graze.


Not to forget the rain and the beautiful rainbow gracing the green fields just before sunset. 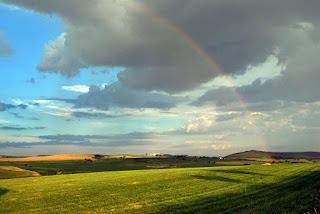 I was filled with love, wonder, awe, feeling energized, refreshed and above all grateful for being able to experience such beauty. One of my best vacations, really. I had to be away for a long time to realize I come from a very special place. To be repeated.

Posted by Antoaneta at 5:10 PM