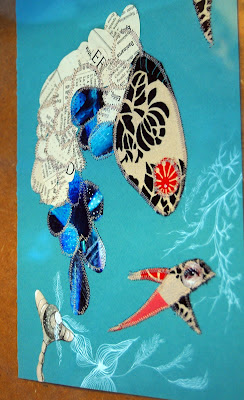 I was struck by the beauty and craft of Daniela Murgia's work, that mixed collage with embroidery, sewing and drawing at the "Ilustrarte" illustration for children Lisbon biennal. I'd love to have one of her books.
Posted by Antoaneta at 11:11 AM 2 comments: 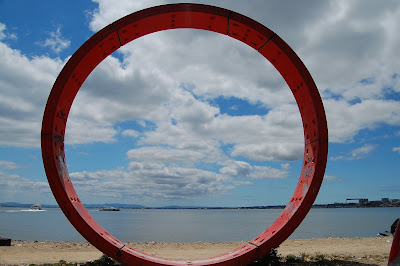 A dot is all...could be translated in English as full stop, but I like this expression. All's that's left is a period. I tend to live too much in the past when it comes to relationships, digging through sweet and bitter memories, sometimes just to have someone to think about. It's probably a sign that I can't accept the absence of a love interest in my life.

When do relationships start or end? I can't tell precisely when I did fall in love with my ex, it was a slow process, that I didn't pay much interest to. I thought it won't happen,  thought we weren't a good match, but he insisted, on and on and on, we even broke up a few months after we started. Then I chose to go back to my beloved Europe and stay in a place I really really liked, eventually doing the job I really really wanted to do. When I left him in the airport I was in tears and hoping he would follow me. Probably our relationship finished that very moment, when we lost sight of each other. He wanted it, at least, he had no intention of having a long distance continuation of something that has lasted almost three years. We tried to pick up the pieces last year in May, when he visited for a while, we even discussed about marriage, but he decided that moving to Europe was not a good idea, considering the economic situation. Second occasion to put an end to it, so I looked towards the future, I lived in the present, went on dates, even had a story with one of his fellow islanders (probably attracted by the same accent, same expressions and some ways of acting).

My road shifted again by the end of 2011, I landed in a lovely country that I happen to know from long before, and I'm doing what I really wanted to do for a long time, planning and marketing cultural events. It's been a long way since I finished my studies and entered the work market. It took a lot of travel, work, more studying and over all patience, faith, believing in my star, my skills, my force. The news of my ex getting married came like a brick breaking a window, especially because when we spoke in January he was still single. Apparently someone else wanted him more than I did and went all the way to Canada to fetch him. Just one month after I'm finding out that he will be a father and move to his wife's place, in the countryside, not too far from me. And all this happened about seven or eight months after our second and final separation. Basically the same plan we tried to agree on, only it came unplanned. It hurts, also because I thought we could be a great team, sharing so many interests, being both creative people. Now it's clear that there's no coming back and I don't even feel like staying friends, we went such different ways that it looks impossible to start from scratch and re-invent our emotional and intellectual ties.

I guess I was well over it from before, and what happened was dans l'ordre des choses. What I thought to be an experience proved to be a relationship, then the other way around, beware of definitions. But it would have been better for me not to find out anything about it, just let our story blend in the canvas of the past, until I was ready to take it with more serenity, which I am trying to do now. There's a sunny day out there, the jacaranda will be soon in bloom and there are many roads still to be traveled.
Posted by Antoaneta at 7:31 AM 2 comments: