No Sex, Just the City 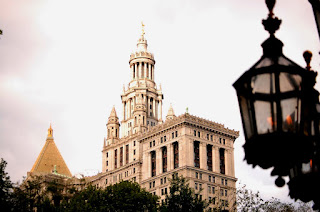 City Hall seen from the park

My fourth time in New York, after two years of absence, and only now I got the feeling that I started to get hold of the City, maybe because I was guiding someone else for once.
I started seeing it in a more coherent way, at least part of Manhattan, with its rich history of sweat, blood, pride, progress and wealth. There are some words now that are very fashionable for describing places: fascinating, magic, charming, vibrant, magnificent, contrasting, applying to anywhere, from the Caribbean to Papua and Paris. As many cities are contrasting, vibrant, fascinating and magnificent, New York is no exception, but what matters is what makes a place so intriguing and deserving that many plump and pretentious words. What do I like in New York, what matches my search of thrill and enchantment.

First of all, I don't even know when I stopped being interested in shopping. I guess I never really liked going out buying whatever allures me, most of the times I have in mind that I need this or that, at least more skirts or dresses, for instance. Fashionista is not a name for me either, I dress for the occasion and thanks to my grandmother's example I have a great sense of mix-matching colours and styles. My wardrobe is full of things that look slightly different than the norm and that I keep forever, because I really happen to like most of them. So shopping is not an issue for me in New York, just like monument list checking. Never been up on the Empire State Building or on a tour to see lady Liberty, as a matter of fact.

This time I paid more attention to my attention and what I like is the profusion of Art Deco details on the sky scrapers, built during the heavy industrialization period, when the machines gradually substituted people (what made us produce more, sell more, buy more and finally get to this latest crisis. Metropolis by Fritz Lang is a masterful example of an artsy alarm signal created during the very same period, another one is Chaplin's Modern Times). An abundance then of crafted metal doors with geometrical patterns, mostly in shiny golden brass, different patterns climbing up the stone walls up to where they become invisible to eye (but not to a more powerful camera lens). Fantasist shapes tower up in the sky, so if one wants to see the best of architecture, one has to look up most of the time. I like this continuous feeling of walking back in time and expecting to see the lovely fashion of the roaring 20's and worried 30's replacing the modern times snickers and jeans. In New York I feel the industrious nation of those times is still up and about, although in the popular areas probably half of the people are tourists.

I like the obvious care for the arts, culture and education that the Central Station, the New York Public Library and the Metropolitan Museum, amongst others, tell about. The Central Park and its gracious statues, fountains and buildings. It's not only a financial and business center, but also a home for the arts and science, starting with the Lincoln Centre and going through all the local theatres, festivals and jazz bars. Compared to many European museums hosted in palaces that were built for living, not for exposing art, the MET amazes by its organization and professional way of display, carefully explaining the context of the work and the life of the artist, meant for educational purposes too, not only for the entertainment of the cultured, initiated visitors. And seeing numerous names of donors on the walls, one understands that these people were not only wealthy, they were also wise and caring, willing to become famous by their good deeds too. They knew that progress comes from education, and they wanted to build a new world based on democracy and meritocracy, so they did their best in making the USA rival mother Europe. For me is questionable either they succeeded, and if bigger high rise buildings made anything better (personally I like user and nature friendly spaces).

So much about the general impression this time. I like the bridges, the old run down metro stations, the food stalls, the street musicians, the artsy Villages and SoHo area, the mix of colours and races, although I find there are more Vietnamese and Thai people in Montréal, and their restaurants too, to my delight. Not to speak about the French style pastry shops, which shine by absence in New York, or otherwise are overpriced, like most of the food. The grocery shopping in compensation was affordable. Although I stay away from shops, I enjoy their artistically decorated windows. On the other hand I know that many dirty jobs are performed by illegal immigrants that live in dumps, far from the pretty side they clean up daily. I don't understand how comes there's no control of it. They get paid less than minimum wage and have no social or medical protection. But they can live in the US and the employers get cheap labor in exchange. One reason I wouldn't like to live in New York, for instance, beyond the over bullicious atmosphere, the long work hours, the short vacations, the weak human relationships, constantly challenged by the accelerated rhythm of life and the obsession of performing and socializing.


We walked a lot, took many pictures, ate little, saw some of my friends and some of the Metropolitan Museum and Central Park, due to scarce time. Which didn't allow us to go to any decent jazz concert or Cuban restaurant, as we planned. I also missed the Italian Arte del Gelato and Obika mozzarella bar. But I managed to get a few bottles of wine, cheaper than in Québec, including the Marsala requested for Tiramisù, so I can make the original recipe. I was very happy that my Cubano fell in love with the City and enjoyed all the wandering, although it went beyond its energy reserve.
Posted by Antoaneta at 3:41 PM No comments:

SOME KIND OF WONDERFUL

Not only I will be going to New York this week-end and my dear friend Jane is hosting us in a great area of Manhattan, but I got a very nice unexpected gift, in the shape of a blue dragon. 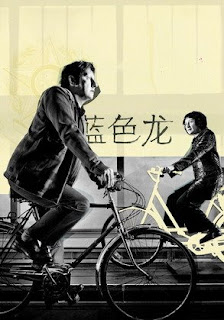 And abracadabra, hocus-pocus, bum badabum...I got an answer the same day offering me two tickets for next Tuesday. As simple as that. Because they care about their public and people that do care about being in that room. I think it's fantastic, and a reason of pure joy.
Posted by Antoaneta at 12:43 PM No comments: