Between my arrival and the wedding I spent a few days, not enough, by far, in Iquitos and the selva amazonica. Just enough so I can get the taste of it, to miss it afterwards and long to go back. I picked Iquitos because of a Mario Vargas Llosa book I've read when I was a student: "Pantaleón y las visitadoras". Via Couchsurfing I got in touch with several possible hosts, finally one of them confirmed that he can receive me at his place. Another one said he can arrange for a less touristy stay in the selva, I imagined he would be my guide. That's all I had on the books when I got to the  small airport of the hot humid city of Iquitos, after an amazing plane ride, overlooking the most incredible mountainous landscapes, here there were snowy peaks getting through the clouds, there blue lakes among brownish green steep hills and valleys. Then we flew over the neverending Amazonian rainforest, like a sea of green, with rivers winding through it like roads in the fields. Actually the only way to reach Iquitos it's either by boat or by plane, the road won't take you that far, even to a city that's home to over 40,000 people. 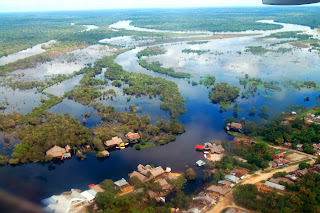 Outside a car waited for me with Ulises and David, most of the taxis though were moto rickshaws, traffic was crazy and the buses didn't have windows. I didn't understand what was going on until we got to Ulises' agency, Carrusel Tapira. Oops, instead of an independent tour I was to go on an organized one, which disappointed me really, but I didn't have much time to look for something else, and on the other hand they seemed to be really nice and knowledgeable, Ulises being the son of a Peruvian and a Brazilian from the other side of the Amazon, a true river creature. Besides, we were few, just three all together, with a Catalan and his Peruvian girlfriend. David got me a rickshaw to take me to my hosts and we agreed on leaving next morning. My Couchsurfing hosts, Pavel and Joanna, are two young Poles living in Iquitos, both kind, with beautiful smiles and amazing sparkling blue eyes. They have a small studio apartment, with cold water shower, a kitchenette and a half working fridge. After I invited them to a deliciously refreshing ceviche lunch accompanied by cocona fruit juice, they took me out to the Nanay river market, Bellavista. It was probably the most exotic I have ever seen so far, sporting grilled cayman and palm worms (suri), Amazonian chestnuts, unknown fish and fruits, turtle eggs and so on. I tasted the suri, it was somehow sweet, not unpleasant, but not fantastic either. The aguaje palm fruit is usually peeled and eaten with salt, or made into a refreshing juice. I also saw ubos and camu camu, besides the well know papaya and mangoes that smelled like heaven on earth. 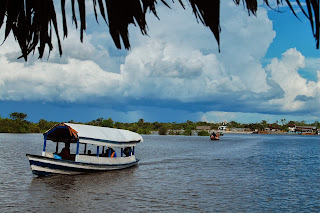 We took a boat with a beautiful roof made of braided palm leaves to Padre Cocha, for a cool beer on a floating deck, where local were swimming sometimes fully dressed, I imagine it would keep your clothes cleaner a longer time. 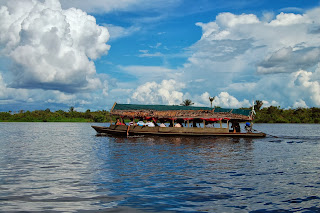 After a chocolate crepes dinner I left the next morning to my dream destination: la selva del Amazonas. Not on a raft like in Jules Verne's 800 lieues sur l'Amazone, but on a small passenger boat, with Ulises and my fellow travelers, Jordi from Catalunya and his Peruvian mountains lover, Denisse. After a couple of hours we arrived in a tiny place where Ulises went to buy food for our stay and we had to wait for the motorized canoe that was to take us to the lodge. While we were waiting I strolled through the quiet village, bought some aguajes  from a broad smile girl, some kind of corn cakes from a couple of schoolgirls and a few sapotes (a big sweet fruit with an orange pulp) to eat later. Being tall and Caucasian, with a Nikon in my hand and walking by myself, I couldn't do anything not to look exotic, so people looked at me with curiosity. It occurred to me that it would feel probably the same if I were in some remote Romanian village. 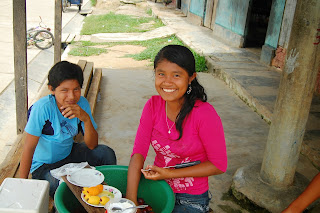 The canoe came after about an hour or so and the seven of  us (Jordi, Denisse, Ulises, our cook, Delicia, her partner and handyman and their child) navigated for a while on the broad light brown Amazonas and then turned right on a smaller river that led us to the path heading to the lodge. We were handed botas de jebe/gum boots and went through mud, crossing some pools over shaking planks, under the amazingly high trees canopy, surrounded by the lush green forest and funny wild life sounds. The entrance to the clearing were stood our bungalows was framed by two majestic trees that I could only compare to a Gothic cathedral. The accommodation was not suited for the faint of heart and comfort lovers, there were two breezy typical huts, built on stilts to keep them above water and snakes, without electricity. Made of tree trunks, palm and banana leaves, a big open one was meant for eating and partying, the other, with full walls, for sleeping, cooking and a rainwater shower. 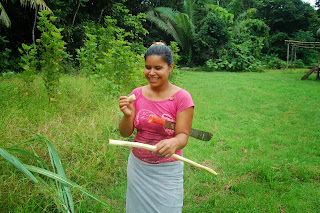 I spent there four exciting and at the same time quiet days, going to bed early and reading with the help of my pocket lamp, waking up within the first morning hours, trying to tell the different jungle sounds, birds, monkeys and God knows what else. Delicia honoured her name and prepared simple great food every single day, over a wood fire, from Amazonas sardines to sauteed noodles, even her rice was cooked to perfection. We had fresh fruit juices, sometimes from plants around the huts, like sugarcane and cocona. 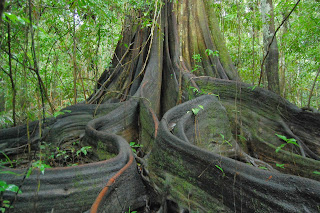 Raul took us around the surrounding selva, not too far in, during the say and during the night. It felt like walking in a strange cathedral, as the trees canopies were so high that they looked like massive pillars with huge roots sometimes, all surrounded by bush and entangled lianas. It made us feel small and fragile, exposed and vulnerable, but the guide's self assurance and calm helped us a good deal.


We discovered healing plants like the pichirina, good for the stomach, and monkey ladder (escalera de mono), good for sores and skin infections. We learned about parasite/strangler plants and admired their capacity to climb upon big trees up to the top in the search of light. Then we marveled at the many types of spiders and ants, the families of squirrel monkeys (saimiri type), the size of the snails or the enormous toads. 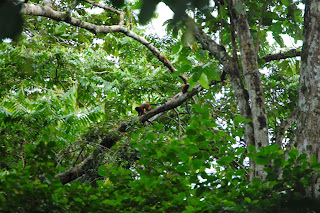 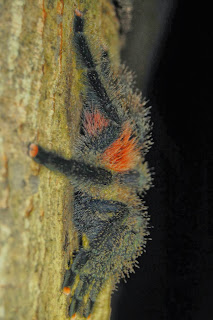 Probably the most impressive creatures were the tarantulas that didn't look that scary to me, but rather endearing, all fuzzy and rather quiet.


Advancing over water was a whole different story, especially through the flooded forest, four of us in one canoe, with the help of the machete. Quite spectacular and very Indiana Jones like. 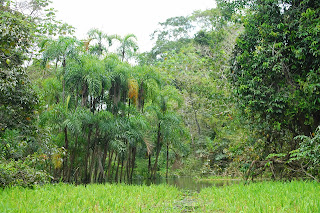 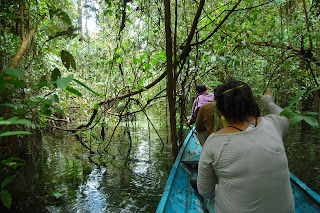 And the amazement wouldn't stop here. We saw a beautiful boa strangling its prey, a vulnerable sloth (in Peru they call it pelejo), up in a tree. The sloths move very little and at a very slow pace because their diet made exclusively of leaves does not provide many nutrients, so they are "programmed" to spend very little energy. They are an easy prey for huge snakes then. 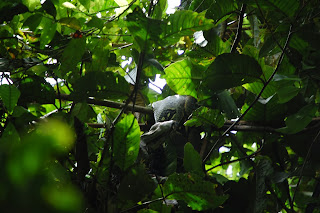 Apart from a small toucan we saw beautiful woven nests hanging from trees, belonging to colonies of oropendolas or paucars (yellow-rumped cacique), both sporting black and bright yellow colouring. Raul explained us that another feathered fellow, the cowbird, lays its eggs in the oropendolas nests, their chicks eating a harmful parasite fly and its larvae that would otherwise harm the host's chicks. A beautiful symbiosis example.

On the longest day we got to a hidden pond covered by huge Victoria Regia leaves (a type of waterlily), unfortunately only one of them was in bloom. Raul showed us how to fish by spear, another technique I saw only in Amazonia. On the way back we had to drag the boat through Raul's small village, Centro-America, set up by his grandfather,  to shorten the trip. One night we went searching for caimans and got caught by a tremendous rain (actually it was raining every single day, alternating with sun, and our clothes stayed kind of damp all the time). The night after Raul simply plunged his hands into the water, and after a short struggle he was holding a small caiman, we convinced him to throw it back in, he was thinking about taking it to the river next to the village. That simple. Those people lives look so adventurous to us, to them is just a hard daily routine, Raul had a scar on his face from a caiman's tail strike, the main danger when you try to catch one, he told us. 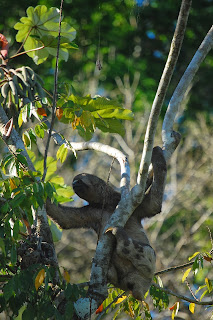 On the last day we paid a visit to Centro-America, tasted the local homemade alcohol, chuchurrin, and saw how people actually live, many times in houses that looked rather like verandas, with half built walls, cooking and sleeping in open spaces. It was also our only opportunity to see a dead piranha lying on a veranda. There were some small solar panels, rented by a company for an amount that  was ridiculous to us. They were enough to get a few hours of light at night time.  When the water floods the village during rain season, sometimes people have to look for shelter on the roofs. In 2012 the water flooded the living space and in Raul's bedroom they found catfish (doncella), boas and even electric eels. When we went there, beginning of February, there were hardly any ripe fruits, except lemons, and hundred lemons would just pay enough for them to get to Iquitos and back. Mangoes and papayas were not ripe yet. We understood that they actually live on a yucca, rice and fish diet most of the time, and cash is hard to get unless you work with tourists. Teachers at the local school only stay for a very short time before they return to the city.

So these few days were filled with teaching and learning, in many ways, sometimes just by looking around or observing people's attitude towards life. I never heard them complaining for instance, saying this is not the life they deserve. The lessons I learned are in Amazonia are, above all, to keep silent, to be patient and move in slow motion. It applies to observing wild life, but also to our everyday exchanges.

My peak moment was getting to swim in the actual Amazon, just meters away from gray and pink dolphins, they actually came closer as me and Jordi got into the water. It was more than I ever dared to dream. I would go back there any time, and I would chose to stay in the village, go to the natural park Pacaya Samiria or camping, not in a jungle freaking lodge!
Posted by Antoaneta at 4:38 PM 6 comments: