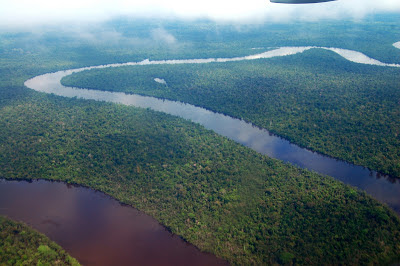 When I first saw the Amazon ribbon winding through a sea of green I started to cry. It was a childhood dream, and even more than a dream, because at that tender age I never imagined I could travel so far. It was more like a myth, a legendary land, and when I got there I became a child again, in a bigger, wonderful world.

Peru was such a complete experience, mixing so many different wild life and landscapes with traditional culture, exotic tasty food and most of all beautiful encounters.  I went there for the wedding of a German and Peruvian friend that I knew from my times in Montréal, and also to meet our other friends coming from Canada, one Brazilian and one Swedish. My trips took me to the three main areas of Peru: coastline (Lima), the Andes (Cuzco and Titicaca) and Amazonia (Iquitos), I'm not too sure to which one of them Arequipa and its mountains belongs to. Among others I missed the "real" coastline, like Ica-Nazca and the northern area, with Piura, Trujillo and the adobe city Chan Chan. My Peruvian friend that lives in Italy advised me to avoid the mountains because of the rainy season, but, hey!, was I lucky or what? There was very little rain and it didn't stop me from doing anything I wanted to do.

My acquaintance with Peru started on the plane with Rocío, a Limeña living in Bilbao, mostly interested in social outings, but clever and full of wit. The people at my first hostel, Red Psycho Llama were kind and knowledgeable, the next day they even shared some refreshing homemade chicha morada with me, made of purple corn. My first encounter with Lima showed me a busy giant city, kind of hot and dusty during the day, with crazy traffic and buses, but still manageable. Like many other enormous urban sites it encloses several cities in one though. With traditional colonial neighbourhoods, sky-scrapers, huge sea cliffs over the Pacific, shantytowns and, most amazing of all, archaeological sites right in the middle of inhabited areas, huacas.

The one I went to is called Huaca Pucllana, contains some Lima and Wari cultures adobe and clay pyramids and plays host to a few typical plants and animals. In downtown I visited some interesting colonial churches, decorated in sumptuous barrocco style, with bright colored original Andalusian azulejos and garden cloisters. The best was Santo Domingo de Lima, maybe because I managed also to climb to the top of the tower, one of my favourite occupations when I travel, I have this weakness for towers, although sometimes I feel claustrophobic on those narrow stairs. Nearby I saw some older people dancing to a song played by a child, about an abusive father, that was quite impressive, as was seeing all the families walking around in their best Saturday attire.

Lunch was my first encounter with the real cebiche peruano (I had it before, but on other meridians) and tacu tacu de marisco, a thick tasty mixture of rice and beans soaked in a seafood sauce. In the Caribbean there is a common obsession with rice and beans, probably born from the times of slavery, when it was a filling meal for the Africans working on plantations. In the evening I went to the pre-wedding party in the fancy San Isidro, met my friends and the family of the groom, we danced salsa, drank chicha morada and the fabulous pisco sour. All the guests got souvenirs from the northern coast area where the family is originally from, a colourful fan and a small sculpture of a birds family with the names of the bride and groom, with their little one in the middle. Everyone went out of their way so the guests would have a good time, I felt so pampered and welcomed.

The next day I left for Iquitos, Amazonia, and came back just in time for the wedding. I shared my room with  my really great Swedish friend, an amazing adventure traveler, but also a very caring and considerate person.  We stayed in a beautiful hostel, with flowery terraces and a garden, but that missed the friendliness and warmth of the backpacker one. We didn't get to do much before the wedding, except our nails and having a terrible lunch in the first Chaufa (Chinese-Peruvian) restaurant we found. The ceremony was one of the best I've ever seen, in a German protestant church, celebrated by a woman, whose dress contained traditional Peruvian elements. Loved and joy filled the air and I felt so good that I finally made up my mind and decided to come, against all odds. The party took place in a glamorous private club overlooking the ocean in the fashionable Miraflores and the German sisters (spectacular looking by the way, tall, blond and cheerful) added more fun to the live salsa band with their bride-and-groom social game.

The day after we (Swedish, three Brazilians and me) went to swim with the sea-lions, just out of Callao, another coast town adjacent to Lima, that hosts also the airport. Besides the fort and a museum you can take a nice stroll along the ocean and meet some local fauna including inca terns, pelicans, and crabs. 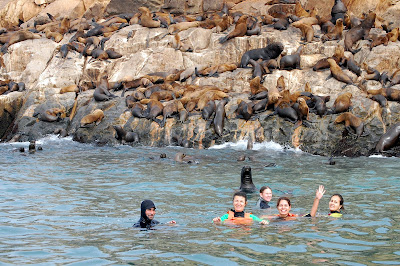 The best part though is the beautiful  boat ride to Isla Palomino that allows you to see more sea birds, like the blue footed booby and the cute Humboldt penguins. The climax comes in the 16C ocean water where you can be 1 meter away from that lovely sea lions, just as curious as you are, keeping though a very small distance. I found it to be one of the most beautiful and amazing experiences of my whole life. Endearing by being so effortless. And we were lucky enough to be the only people in the water, it didn't look like a touristy place at all. The four of us, the guide and about 10.000 sea lions, pups, females, young and older, huge males, some with many scars. We were the ones looking exotic after all.