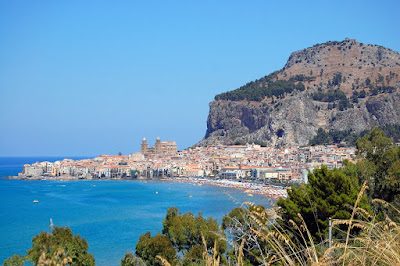 Even if I had any expectations, I have to admit Sicily went far beyond them, like in any other country that sits below a scorching sun, everything there borders the superlative. On the positive and the negative side, true, but exercising an irresistible attraction, maybe also because I have a weakness for ports and islands. We spent nine full days there without seeing a cloud. The sun makes things look brighter, but also blurred, their contours fading in the hot trembling air. A feast of colours and hard to bear heat.

Beautiful sea, deep blue skies, the silhouette of Etna with its 3350m dominating it surroundings, delicious food - arguably the best ice cream on the planet, history, art and creativity beyond the wildest imagination. Who would believe there is such a thing as Arabian - Norman architecture? Or that the poets at Norman kings court in the XII century were Arabs, while the administrative language was still Greek, until the immigrants from the continent finally latinized the island? Sicily is more than a border between continents, it is a gate, an interstitial space where the richness of exchanges crosses over centuries reaching our time.

Its history is as intricate as the Arab and Byzantine mosaics adorning its churches and cathedrals, as inexplicable as the amazing combination of architectural elements coming from all ages of art. An emirate, then a kingdom, or sitting under imperial powers, a pure mixture claiming its own identity of many cultures. Once part of Magna Graecia, now part of the Republic of Italy, still holding some autonomy, having its own legislative assembly. Sicani and Siculi to start with, then Phoenicians, Puns, Greeks, Romans (Archimedes got killed during the siege of Siracusa), Byzantines, Arabs, Normans (Hauteville/Altavilla) dynasty, even Swabians (Hohenstaufen), the French (Anjou/Angiò), the Aragonese, who brought Catalan as the court language, all ruling for not more than two centuries, fighting continuously for the power. When Aragon and Castilla were joined through marriage, Sicily became a feud of the Spanish Crown, for about three centuries and its sumptuous barocco art easily rivals the one of Spain and its other colonies. Even the Savoia and the Habsburg families took hold of this golden island, so Sicily finally chose to unify with the Kingdom of Naples under los Borbones, a family of French descent that got to rule half of Europe. 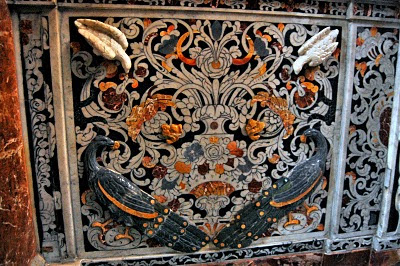 All these different nations left their mark on the food, the architecture, the arts, the lifestyle. So traveling there is like taking a trip with a time machine that's also able to overcome space constrictions. Churches and palaces mixing Arab and Byzantine mosaics and cupulas, Romanesque structure and Baroque paintings and marble intarsia.

For gourmets without prejudices - calf spleen sandwiches - pani ca meusa or roast intestines of sheep or goat - stigghiola. For seafood amateurs like me - all kinds of fish and shrimps, plus sea urchins, oysters, small conchs and a variety of seashells, ranging from well known mussels to razor clams - cannolichi and big clams - fasolari, culminating with the calamari ink pasta, as delicious as unattractive. A lot of almond paste sweets, including marzipan fruits (frutta di Martorana) and the famous cassata, or pastries filled with fig and citrus jams. I had a delicious watermelon thick jelly flavoured with jasmine and sprinkled with pistachio bits. 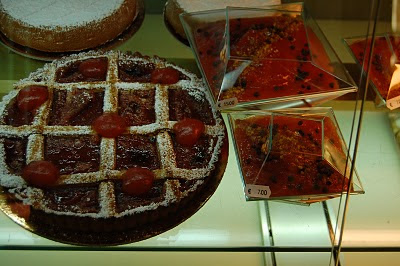 The first two evenings we went to a symphonic concert at Palazzo Chiaromonte or Steri, then a jazz concert in the garden of the ruined Santa Maria dello Spasimo in the Kalsa district. We were lucky enough to be there in time Wednesday for the Santa Rosalia day, the patron saint of Palermo, extended sometimes to the whole of the island. Beside a popular music and theatre show in the courtyard of Theatre Ditirammu we admired the whole procession through Via Vittorio Emmanuele, made of about 40 colourful caretti siciliani carried by heavily adorned horses and exposing a beautiful girl dressed in white decorated with red roses, the symbol of the saint. To my great pleasure, with the contribution of the Santuzza, I met twice a young Sicilian actor whom I happened to see just a few weeks before acting in Bucharest: Alessandro Romano,

Around Palermo we have been to Monreale, worth a visit for its panorama of the Conca d'Oro region and the most amazing Cathedral, from 1174. Then Cefalù, a charming medieval town on the shore, with a swarming beach and enchanting atmosphere. Most of the time we swam in Mondello, with crystal clean waters and fine sand, but far too crowded. The picturesque Sferracavallo fishing village attracted us with great seafood. As I was longing for quite a few years to see Etna, a one day trip there and to the touristy Taormina accomplished my desire and confirmed my disgust for programmed group trips. Nevertheless, it is an unforgettable experience to be on top of an active volcano and see old craters, lava courses and wisps of smoke raising into the thin air. 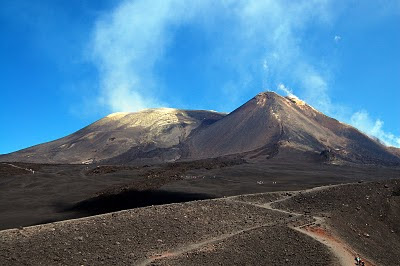 We expected people to be noisy and drive like crazy, so there where very few downsides to the whole experience. One was the shops schedule, including supermarkets, most of them closed daily from 1 to 4pm, on Sunday and Monday mornings. plus the Santa Rosalia celebrations made them close doors for two extra days in the middle of the week. Palermo is not dirtier or noisier than a lot of other cities, including New York for instance, and our bus trips proved very successful. People were very nice, eager to help and answer questions, also curious about where we're coming from and our way of life, willing to share their experiences and knowledge, given that we know Italian.

Summing it up, I will definitely go back to Palermo, also eager to see more of Sicilia, there is plenty to learn and discover. I had the same great time with my mother, both sharing the same interest in combining sightseeing with sea swimming and food and wine tasting. I could say it was a complete vacation from all points of view, overwhelming all my senses with a profusion of smells, colours, music, landscapes and buildings all admirable in their own way. I had to admit to myself that Italy still sits comfortably on top of my preferences and makes me feel welcome and at home, offering so many things to my curiosity about the world's ways.
Posted by Antoaneta at 12:00 PM 3 comments: