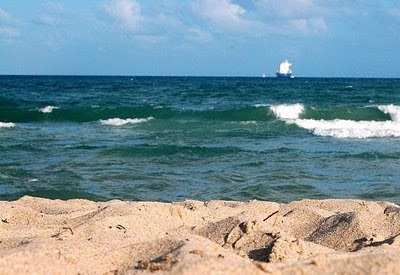 So I want to leave Canada and go live in an European city of my choice this time, close to the sea, not too far down South or up North. Oh yes, the crisis is still ravaging the business and consequently the job market. By the way, I'm also 35, a little past the age of looking for my own true self around the world and back.
Oh, no! What a crazy idea living this cozy comfy existence of mine, my boyfriend (who can follow me if he chooses to do so), a nice apartment (that I rent anyway), my cat (that I can take with me), this secure and safe job that bores me to death, the many friends of many cultures that I've known for only five years maximum and have to deal with their own lives anyway, like anyone else on this planet. Five years were not enough to grow roots here, and a passport doesn't buy any feelings of belonging or being home. Of course I will miss some people, but being here I miss my friends back home and in other countries. The balance is never even.
Yes, it is a risk, but it occurred to me last night that this is not a one time decision. A while ago I decided once and for all to take risks, to swim against the current, to draw my own path, regardless of what did Mr. X and Mrs. Y. I took a risk when I went to Lisbon in 1997, fresh from university, to work in a Duty Free Shop. Then to Turkey as a waitress on the very pretty island of Büyük Ada, across from the fascinating city of Istanbul. About two months later I was in Athens for the whole of November and I managed to see the Minoic Knossos palace, an old dream of mine. In 2001 I left a career that just started to blossom and I stepped up on a cruiseship and became a qualified seaman aka foreign languages sherpa at sea and on the Caribbean islands.
Canada followed in 2004. I have never been here before, but it was one of the few countries that received immigrants based solely on your request and background. It didn't work out, I'm not fit for North America which is not fit for me. And it doesn't mean Montréal is not nice or Canada is not a beautiful country. It is a marriage that was simply mismatched, also because it was a long distance decision. So I want to try to settle in an European city that this time is not the first opportunity that arrised, but a conscious choice, why should that be bad? How many Romanians left Canada to go to Barcelona? Caminante, no hay camino, se hace camino al andar says one of my favorite poems. Maybe it is not the way, but it is MY way and I have to try it, no matter what. As long as there's no matter of life an death, what's the matter?
Posted by Antoaneta at 6:32 AM 3 comments: Links to this post 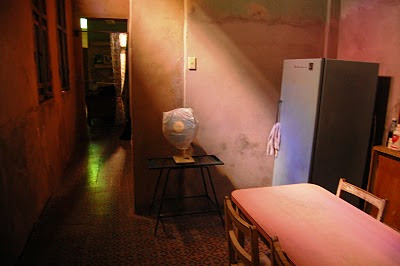 Since I came back, on Saturday the 16th, I feel like I'm living in a black and white TV set. Since I left Cuba, the colours vanished, from the houses and people's clothes, as did the smiles and the quick wit jokes and compliments on the street.
There's a certain liveliness about Cuba, and especially La Habana, out of the few places I visited, that filled me with energy, tenderness and joy. Or should I say gratitude, for the Cubans, for making me feel so at home, welcomed and sheltered. Maybe it is also the language, this barrier that does not exist in my case, or my bubblying personality, my love of colours and extroversion. The fact that I knew communism until I was 15 and that I toured the Caribbean from 2001 to 2004. Having seen a few Cuban films and read Reinaldo Arenas and Alejo Carpentier. Maybe it is all that, maybe it is just an inner feeling.
I realised my affinity with Cuba has little to do with the one I have for Italy. It is admiration mixes with compassion and tenderness. The Cubans I was lucky enough to meet conserve a certain childhood ingenuity, confidence that the world can be better, that people like me, who experienced living in many different ways and in several places, puts always into question. Today it ocurred to me that most people we talked to reminded me of my mother, with her cheerfulness and impossibility to surrender to sorrow and cinicism.
Than it was the whole grandeur of Havana, its large streets and beautiful buildings, with vast rooms and high ceilings, even in more popular neighbourhoods like 10 de octubre, so unlike the appartments and houses we live in, molded with an innate sense of beauty. A past when people could afford all that...what a marvel. Especially when you compare it with the empty shops and scarily low salaries, from 12 to 30 dollars a months, the latest being for the famed Cuban doctors, that also get exported to Venezuela, in exchange for oil and prestige. People have to "solve", "resolve" - manage, in a word - to get more money somehow. Either by inventing themselves another profession: massagist, craftsman, electrician, pastries, candies or cake maker, prostitute, in the worst case or by succeeding, God knows how!, to arrange nicely enough one or two rooms to rent to tourists, for which they pay heavy taxes, monthly and yearly, either if rooms are occupied or not. Same goes for private family restaurants - paladares, they are not allowed to have more than four tables, as becoming rich would be a counter-revolutionary action. Another category is made by the people who succeed to steal from work items that can be commercialized on the black market, from lightbulbs and batteries to blankets. Maybe it's not honest, but if the State took everything away from its citizens, isn't it just to get some scraps in exchange, just to make a living? There is free healthcare, but there is a lack of doctors (so can they really afford to send that many to Venezuela?), of medication and hospital amenities. There is free education, but many teachers deserted looking for something more profitable. And when you get your free education what kind of job do you get? Now, even if you make enough money, the shops are mostly empty and other clothes than jeans, shirts and t-shirts impossible to find. It was cool when we were there and on the all along the commercial Calle Obispo we couldn't find a damn sweatshirt or light jacket. Food is scarce too, what we found in the fancy Vedado neighbourhood market were good fruits and veggies, the pescaderia sold only frozen fish and shrimps. We also saw long lines for the only type of white bread available. The distribution card still exists, for rice, sugar, a little black beans and coffee and one mug of oil, probably soy. Otherwise there also a package of pasta and some crackers. The hard currency shops (Cuba has moneda nacional pesos CUP, 24 of them making 1 CUC - convertible peso, the salaries, the food card shops, the market and the bread are in CUP) sell Havana Club and other liquors, bottled water, powder soups and canned juices, fruits and veggies, at the same prices as in Canada. Now let me guess who can afford that.
But against all odds people are extremely courteous and helpful, unlike any other country I happened to visit. Cuba was to me a beautiful and sad window with a look towards a luminous sumptuos past and another one towards a gloomy decaying present. Just another great socialist victory, like the one I grew up with, in the name of people, payed heavily by the people. 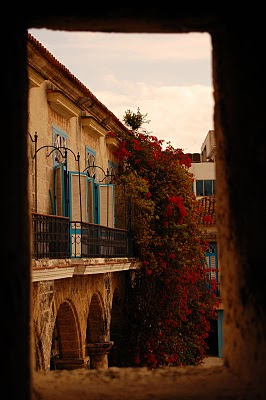 Posted by Antoaneta at 5:16 PM 2 comments: Links to this post