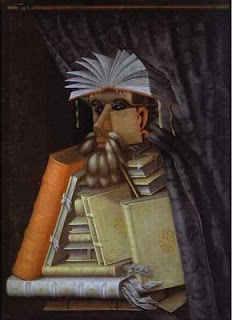 Got a reading questionnaire on Facebook, in Spanish, but I'd rather deal with it here.

1) What author appears most often on your bookshelf?
Maybe Italo Calvino, Bruce Chatwin and Jorge Amado, but the range of my preferences varies tremendously.

2) You owe most copies of which book?
None I remember. I bought twice Le città invisibili by Calvino, as I gave away the first one.

3) What fictional character are you secretly in love with?
For a long time it was Stavrogin from "The Possessed" by Dostoevsky si Darcy from "Pride and Prejudice", I liked the mysterious hard to get guys. Now nty heart has its feet on Earth:)

4) What book did you read again most often?
I don't really get back to it. Probably short stories by Chekhov and Bulgakov, plays by Shakespeare.
5) What was your fav book when you were 10?
I remember the authors: Alexandre Dumas and Jules Verne, Russians Nosov - Adventures of Dunno, Rybakov - The Dirk and The Bronze Bird, Obruchev - Plutonia & Sannikov Land (SF fantastic books about living prehistoric animals), Uspensky - Crocodile Gena, some two other Russian books with real animal stories and a beautiful anthology of Asian fairytales. All these books had the virtue of opening me towards other cultures, a curiosity that I will never lose.

6) Worst book you've read last year?
I've read a good deal of bibliography for my thesis, all were good:) The last bad book I remember: 11 minutes by Coelho, sometime in 2004

8) If you should force someone to read a book, what would that be?
Shakespeare's plays for the large range of aspects, feelings, subjects and literary craft.

9) Who do you think should get a Nobel prize for literature?
It is unfair to choose a single author, still: Salman Rushdie and Umberto Eco (whose personal libraries hold about 50.000 books, by the way)
10) What book would you like to see adapted to the big screen?
Already done - Lord of the Rings, I've read it 12-13 years ago. Oh yes, all the Asian fairytales of my childhood:)
11) Describe the strangest dream including a writer, a book or a fictional character?
Can't remember.

13) The most difficult book you've read?
It was hard to deal with Kafka, it gave me some terrible anxiety states. "Doctor Faustus" by Mann, I couldn't even finish it.

14) Do you prefer the French or the Russians?
Most clearly the Russian: classics (Dostoevsky, Gogol, Goncharov, a little less Tolstoy - too exemplary for my taste), a modern who became classic: Bulgakov, the contemporary Bulat Okudjava, even if he's not really Russian. I also do like the French, but not in such a passionate way as the Russians. I went crazy for Balzac, Zola and Giraudoux in my teens. There are Marc Augé and François Laplantine in anthropology.

15) Shakespeare, Milton, or Chaucer?
Shakespeare. Milton I haven't read. I love Chaucer, but there's no one like the good ol' Will.

16) What do you mind most about reading?
That I can't do it while I walk:)

17) Your fav novel?
What?! I do not intend to spend my day writing this list.

18) Do you play?
I don't like card games, nor videogames and I'm lousy with sports. The last time I played Monopoly, the Lord of the Rings variant, about three years ago.

20) Non-fiction?
Anthropology, travel and psychology. No self-help and new-age, please.

21) Favourite writer?
Far too many, some are to be found within the above answers, less the Japanese, Ismail Kadaré and Milan Kundera. Also Latin-Americans: Marquez, Llosa, Amado, Cortazar, Carpentier, Arenas, some Borges. Spanish Cervantes, Almudena Grandes and Antonio Gala, Portuguese Fernando Pessoa. Some playwriters: Pirandello, Brecht, antique tragedy, Racine, O'Neill. Poets: D.H. Lawrence, Eugenio Montale, Giuseppe Ungaretti, Antonio Machado came with me to Canada. I do not exclude Romanians, only most of them were mandatory in school. Examples: Rebreanu and Camil Petrescu.

22) What writer do you think is over appreciated?
Paulo Coelho...brrrrrrrr

23) Book to take on a desert island?
The ones I haven't dare to read yet: Iliad and Odissey, Divine Comedy 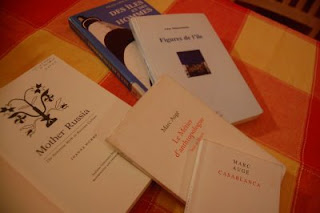 Mother Russia: the feminine myth in Russian culture, by Joanna Hubbs and Des îles et des hommes - Françoise Péron, a study about the Britanny islands. Then I start again with Romanian contemporaries, many to be found at Bibliothéque Nationale du Québec, starting with cu Veronica A. Cara - Baba Lina.
Posted by Antoaneta at 8:55 AM