JANUARY 8, 2009 - SOME MORE THOUGHTS ABOUT THE CARIBBEAN CRUISE 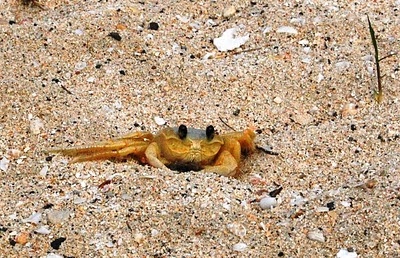 Out of the four ports of call, I knew pretty well the first two, the third was completely new and the fourth a vague reminiscence.

In 2002 - 2004, while most of my ship colleagues were rushing to the mall for shopping and movies, I was either wondering through the old city or seeing some film at the Fine Arts Cinema, in case they were playing something Spanish or Latin-American. Stepping on my own traces, I walked once more along Paseo de la Princesa, under the last sunrays; on the blue cobbled stone streets; through the Christmas decorated Plaza de Armas, stopping by the cemetery, the beautiful now hotel El Convento, savouring its walls and furniture centenary atmosphere; eating shrimps with mofongo de yuca and tostones at the traditional creole restaurant El Jibarito, drinking Mexican sangria at Maria's. We ended up taking funky pictures under Columbus' statue, just like I did before Xmas 2002. The funkiest ice parlor I've ever seen - Ben and Jerry's - didn't have any appealing flavor that evening. The coqui frogs accompanied us with their birdlike chirping. This kind of pilgrimage had some kind of therapeutic effects, it was reassuring to go to the same places and do the same things just like more than four years ago.

The guys at Maria's bar recognized me and so did my dear Maria, the french from Biarritz who spent already quite a few decades on the island - this touched me deeply, as did the news that Willy, the gentleman-farmer with a straw hat and dressed in immaculate white, that used to quote me from Pablo Neruda, was ill. I left full of joy and nostalgia.

As I love turtles I had no choice but go to my paradise like public beach: Brewers Bay, where Green Sea Turtles wander in the crystal clear waters, grazing the bottom sea grass. There are usually very few people around, and this was my favourite nature contemplation spot, where I could sit or swim quietly, feeling one with the Creation. My patty maker and seller, Hyroon, came around lunch time to her kitchen-caravan, to my great joy. She simply asked me "So, you're back?", warming up my heart, you know you somehow belong somewhere when at least one person there knows you when you come back. Unfortunately she brought no dough so I just had a bitter-sweet refreshing mauby juice and we headed to town looking for salt fish and conch tasty patties.

Charlotte-Amalie keeps its antique charm hidden under the excessive commercial spirit, through the narrow lanes called gadde (a memory from its Danish times), packed with bars, restaurants, galleries, jewelry and souvenir shops.

The bookstore on the pier where I bought a few books by my travel writer guru - Bruce Chatwin, is now smaller, there's no more upper floor, which took away much of its charm, but the good books are still there. I found an interesting one: "Cruise Confidential" by the only American guy to work in the dining room (for the sake of a Romanian - hahaha!) - Brian David Bruns. A good story about ship life - in his department. I realized that, although we lived closely, different departments had different stories and issues.

On the pier I also met an ancient boss of mine (Chief Purser), Antonia Kordic, from Croatia, she was a nice one, so I was glad to see her.

The sail away in the velvety night had the same charm, with the lights bright like Christmas candles on the dark silhouettes of the rolling St. Thomas hills.

First, we made the bad choice of a beach trip, which had us stranded on Catalina island, Italian property, under alternatively clouded, dripping and rainy skies, with no food around, only souvenir shops. I took a tour of them enoying talking to the Dominicans and buying a small wooden turtle. Those guys have a hard life, selling that Caribbean touristy crap that looks alike all over the place, for hardly food and a dwelling. Still better than cleaning after the tourists I imagine.

The boat brought us back just in time so we can pay a visit to the nice artist village Altos de Chavón, built by an American millionaire (Charles Bluhdorn) for his daughter's birthday with the money he made out of sugarcane and the work of those poor people. The place looks like an Italian middle-age remain, downlooking on the green lazy waters of the Chavón river, over grassy and bushy even greener slopes. Extremely picturesque. Fortunately it was designed by a talented Italian scenographer, so it doesn't look like Disneyland, but still, it has nothing to do with Dominican culture and history. It's part of the Casa de Campo millionaire complex, packed with VIP villas, golf courses and God knows what else a lot of money can buy.

We had a nice cozy lunch at Le Boulanger, topped with an amazing tres leches dessert then we headed back to the departing ship. I had the feeling the only true Dominican things I saw were the river and the dessert. Welcome to the Caribbean islands, US, Spanish and Italian properties welcome you and your money!
Posted by Antoaneta at 7:08 PM