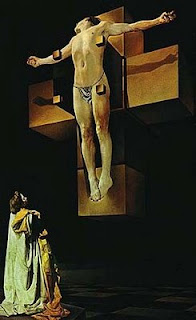 1427 days ago
As I am working as a volunteer at the International Festival of Films about Art, I saw a few films last week-end and I'll continue this Saturday.

The documentary I saw about Dali and the different sciences that influenced his creative process opened my mind towards the ideas behind his paintings. I always loved words and images more than numbers, mathematics and physics were rather boring and insipid for me in highschool. Numbers are so precise, words have so many senses. Geometry was the only one that awakened a vague interest in me.

But many times I would stop and stare at the perfection of the nuances and shape of a flower, wondering how was this possible, how can so much beauty and delicacy exist in such a simple thing?

Salvador Dali was a friend of Romanian prince and mathematician Matila Ghyka (that's really funny for a Romanian name), who came up in 1932 with the Golden Number - Golden Proportion theory. According to him all symmetry and harmony of shape are tributary to this report: 1,618. Pineapple fruit, flowers, shells, leaves, even human body are illustrating this theory. Pyramids, the Parthenon in Athens, Renaissance paintings are other proofs.

So Dali used this theory. But next to the mathematics, he gathered knowledge in nuclear and molecular physics, quantum mechanics, the Big Bang theory, DNA (ADN in Latin languages) and tried to show it all through his work. Like the famous Soft Watch which represents in fact the relativity of time. He knew that our senses and our intelligence are not enough to perceive and explain the Universe.

But what struck me in that film was the mention of the HYPER CUBE, a four-dimensional geometrical figure, to suggest the other dimension, the one we cannot perceive. Christ is to humanity what a hyper cube is to the cube. "Dali understood that Christ was the interface between two domains and was due to ascend to another one we cannot comprehend". Isn't it beautiful? To Dali all symmetry around us, all harmony and visual beauty were clear proofs of God's existence. Even DNA (ADN) code's structure. God as the supreme arhitect and mathematician.

To me, the need of creating and admiring art has no other explanation. Art recreates reality, in a supra-reality, the emotional dimension of it. It satisfies our longing for the outter world, the one we just feel, we know it is there. Because God is beyond the visible and the comprehensible, unlike anything we can perceive or explain. But He talks to us through the beauty of the world or the one we are able to create. A bright red apple, a perfumed pineapple, a luminous sunflower, clear water with colourful fish swimming in it...the little miracles we see every day.
Posted by Antoaneta at 8:25 AM